Advisory Council on the Status of Women

The ACSW purple ribbon theme focuses on supporting survivors of sexual violence to thrive. Being open, listening and speaking without judgment, and knowing how best to respond can have a huge positive impact on survivors and their ability to move forward. We have a responsibility to act with compassion and knowledge as individuals, and as a community, to make the world right. Gender-based violence can be stopped.

Annually, volunteers cut and pin more than 17,000 purple ribbons to bookmarks, for distribution across the Island. The purple ribbons are worn to honour the many lives lost to gender-based violence and to signify a commitment to ending violence in all our communities.

The Purple Ribbon Campaign Against Violence (Campagne du ruban violet contre la violence) was initiated by the PEI Advisory Council on the Status of Women in 1991 to raise awareness about violence against women, to remember the 14 women who were murdered at L'École Polytechnique in Montreal on December 6, 1989, to remember the 10 Island women murdered by someone who knew them since 1989, and to call for justice for missing and murdered Indigenous women across Canada. December 6, 2019 marks 30 years since the Montreal Massacre. We are called to mourn and act to end gender-based violence that continues.

MEMORIAL SERVICES FOR VICTIMS OF VIOLENCE


On Friday, December 6, 2019, a Montreal Massacre Memorial Service will take place at 12 noon at Memorial Hall, Confederation Centre of the Arts, Charlottetown. On the 30th anniversary of the horrific murder of 14 women at Ecole Polytechnique in Montreal, we gather to remember, to mourn, and to work for change. The service will also commemorate the ten Island women who have been killed since 1989 by men who knew them, and we will recommit to ending violence against women everywhere.

To mark the 30 years since the Montreal Massacre, the service will focus on intergenerational effects of violence and will include a Mi'kmaw welcome and prayer, an address by PEI feminist Dawn Wilson, moving musical performance, and the unveiling of a commemorative art commission created by Patricia Bourque. Family members, dignitaries, and community activists will light candles in remembrance of those whose lives were cut short because they were women. Everyone is welcome. 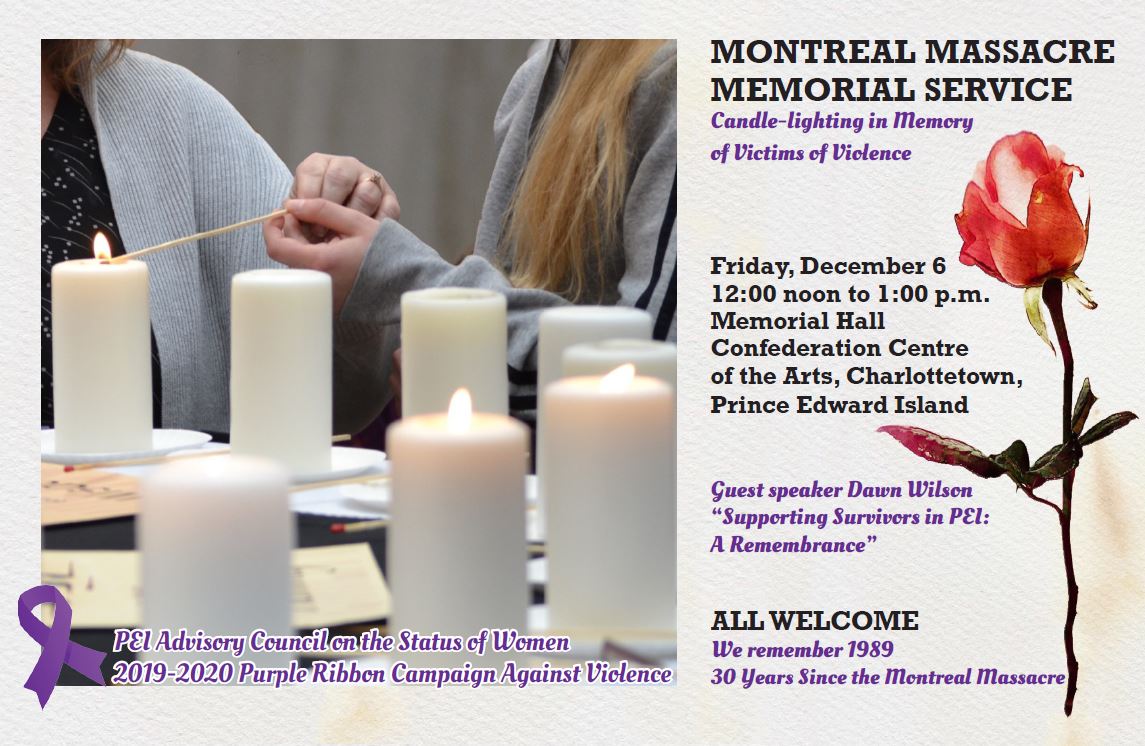 This information has been taken from the website:
Advisory Council on the Status of Women
URL: http://www.gov.pe.ca/acsw/index.php3?number=1056184&lang=E